Photos: Click on a thumbnail for a hi-res version. 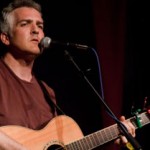 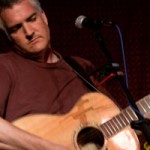 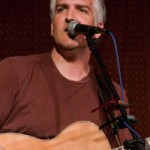 Tom Woodbury is a singer-songwriter who, armed with an acoustic guitar and a handful of capos, sings about his quirky view of the world, blending folk with some tasteful pop and rock. Described as “smart and soulful with something to say,” his songs are heartfelt, often witty, and always honest.

Tom’s first full-length album TABLE 10 shows off his well-crafted songs with a top-notch group of musicians.

He wrote his first real song when he was eleven and he’s been writing and playing ever since. He did take a few years off around the millennium, but the music has found him again and he couldn’t be happier about it. He’s been playing regularly in and around Brattleboro, Vermont since 2007 and in 2008 he bit the bullet and recorded a CD which hit stores in 2009.

“Good music with a cup of coffee in the morning or pint of ale in the evening.”
-facebook listener comment

“A fantastic debut album from an unsigned artist. Just the right blend of folk, rock and blues. Nicotine Blues is my favorite cut. Sit back, relax and let Tom take you for a fun ride! A great find on iTunes.”
-listener review at iTunes

“This is a spectacular album. After listening to it four times, I keep hearing new things. It’s rare to fine [sic] an album that combines great music with heartfelt, strong vocals. Tom Woodbury does both. Some songs are fun, like “Broken Wheels” and “Nicotine Blues”. But “Don’t Toss Your Heart” is a just amazing. And even better, there are no weak songs on the album. It really doesn’t get any better than this…”
-listener review at cdbaby.com

His song “Broken Wheels” was featured on NPR’s Car Talk in September 2009.

He once had the pleasure of opening for Livingston Taylor and he’s still grateful that Liv didn’t say something like, “Son, you should consider taking up the oboe.” Instead, Liv used the words “clearly superior songwriting” after hearing him play.

He’s willing to entertain comparisons to John Gorka, David Wilcox, and Richard Shindell, but such comparisons invariably make him blush and stare at his feet.

Tom grew up in Holden, Massachusetts, playing in the obligatory secondary-school rock bands, eventually with a band that recorded a 45 at North Brookfield’s Long View Farm. He studied traditional Western music theory and jazz theory and improv in college, graduating Cum Laude with a degree in Classics (that’s right: not one, but two dead languages). During and after college, he played at open mics and the ubiquitous New England church basement coffeehouses, trying to find his voice and a home for his songs that he couldn’t quite label. Eventually he discovered the “New Folk” music of the late 1980’s and early 1990’s and figured out that maybe he wasn’t completely crazy for wanting to sometimes be funny during the pretty songs and touching during the upbeat.